A Sample of the Secular

It is no great surprise to people when the face of Jesus or the shape of Mary appears randomly on a tree or underneath a highway overpass. Let it be known, however, that while these religious sightings happen with greater frequency, there are plenty of secular sightings too. Originally, Madonna of the Toast was only going to focus on images of religious figures, but as research got under way, I found myself gravitating to the forms of celebrities and historical figures. The ability to see any of these manifestations is borne out of belief, and it is fair to say that some folks believe in Hollywood as much as they believe in any organized religion.

So for today’s dose of blog, I figured that I’d share a bit about Myrtle Young and her famous collection of potato chips. Pre-Internet, Young got famous touring around with her chips that resemble Bob Hope and Mickey Mouse. She’s been on every talk show you can imagine, and seen a good part of the world all because of potato chips she collected while working for the Seyfert Potato Chip Company in Fort Wayne, IN.

Young’s potato-chip induced celebrity has been furthered by the Simpsons. In the “Selma’s Choice” episode, Marge’s great-aunt Gladys bequeaths a collection of potato chips that resemble celebrities, which Homer eats during the reading of the will: You’ve made your mark when the Simpsons spoof you.

So, it seems, the secular has just as much power as religion when it comes to making an impact on culture at large. I’m lucky to have had the chance to speak with Myrtle Young at length about how potato chips changed her life. That story, as well as some excellent photographs of the collection by Tim Perroud, can be found in the book. Other secular sightings in the book include Rasputin, the Michelin Man and Jar Jar Binks (just to name a few).

Why read about something when you can just watch it?

And in other blog-centric news, someone at the Wired News blog blogged about this blog.

What Is It About Dogs and Jesus?

What do you see? Some folks in Southern California see the face of Jesus in this muddy, claw-scratched doggie door. And it's not just any face of Jesus, but the face from the Shroud of Turin.

This story was reported last week, and I found it on PE.com. Word is that the two dogs who use this door were soon going to be sent to the pound, but in light of this divine, or at least dirty, intervention, Max and Hercules will remain at home, where they can bark at pool cleaners and mail carriers.

Lots of people have asked me about the cover of Madonna of the Toast, specifically about the face on the toast. Tim Pahs sent me the toast, which he cooked up in a custom-made cast iron pan as an artistic statement about religion's influence on American culture. The face in the pan, and on the book's cover, is Jesus's, and it is from the Shroud of Turin.

One of the many reasons I so enjoyed putting this book together is because all of these visual occurrences make an initial impact, but then set off a chain of events, that in certain instances have incredible lasting power, and become about much more than a recognizable face on a random object. They speak to one another, echo and whisper their secrets that only a select few hear, but we can all see (though sometimes we have to squint).
Posted by Buzz at 1:46 PM No comments: 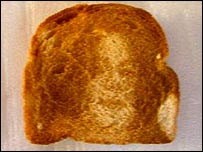 Who says that the appearance of icons on toast has no topical purpose? This MJ toast surfaced back in June of 2005, supposedly at the very moment that Jackson was acquitted of child abuse charges. From bread to toast, the manifestation of innocence! 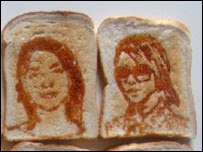 Now, this piece of toast with Victoria Beckham's likeness (she's the one in the sunglasses) is a total fabrication, created by British artist Dermot Flynn. While I could never get a good lead on the MJ toast for the book, I was able to contact Flynn, and include some of his work in Madonna of the Toast.

I bring these two toasts up today because if there's one thing I've learned in my short time blogging, it helps to read the gossip columns. Apparently, in light of Victoria Beckham's pending move to Los Angeles with soccer-star husband David, MJ has suggested that the couple buy Neverland Ranch. Word is, the Beckhams have declined the offer.

So there you have it, yet another example of iconic faces on random objects carrying (pop)cultural weight!
Posted by Buzz at 9:38 AM 1 comment:

Jesus on a Dog's Haunches?

In my book, the likeness of Jesus appears on a pierogi, sheet metal and a mandolin, as well as in a frying pan and a bottle of hand lotion, but this example, found on a dog named Angus MacDougal, came along too late. Maybe I'll use it in the sequel to Madonna of the Toast. Believe me, there are no shortages of such phenomena . . .
Posted by Buzz at 11:26 AM 3 comments: 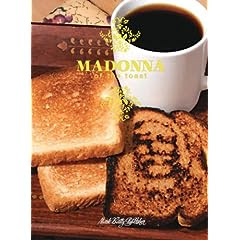 It's going to be a slow start, but this blog will report all things Madonna of the Toast. You can find out more soon!
Posted by Buzz at 10:05 AM No comments: