Last year, right around now, parishioners at St. Simon and St. Jude Church in Tignish, Prince Edward Sound, Canada, saw the Sacred Heart of Jesus in this purple fabric, which used to cover the tabernacle. After the initial discovery by Angela Callaghan, weekly attendance at the church increased by 400 people!

This new face of Jesus, reported today by both The Guardian and CBC resides in the grain of a plank of pine, which makes up part of a cross. Amazingly, Callaghan had actually helped with the building and staining of the cross. Marjorie Jeffery, the woman who first spotted this face, finds the visitation reassuring, as do others who also see it.

Seems appropriate that Lent delivered Jesus's face on a sheet tray, and now with the approach of Easter, His form returns, not to a school cafeteria, but a church.

I'm off to Nashville today to hang with the good people at Bongo Java, former home of the Nun Bun. Want to know more? Scroll down, or check in this weekend. Hopefully I'll have a story or two . . .
Posted by Buzz at 10:05 AM No comments:

A Russian Face and a Face from Russia

A great reading at KGB last night. I’ve read there before, and it is always a crowd that has come to listen, and engage. With Steve Ettlinger and William Bryant Logan also on the bill, the three of us fielded questions and doubtless turned a few new people onto our respective books. Also very cool to read the chapter from Madonna of the Toast about V.I. Lenin’s face appearing on a shower curtain, since the bar is always decked out with old communist propaganda, including a bust of the Bolshevik.

And imagine my surprise upon finding this Jesus face from Russia as I was making the research rounds today. While it is not too difficult to see the eyes and nose, I’m not sure how this rock has been decreed holy. Also interesting is the fact that these occurrences are usually interpreted as auspicious, but in the article from Interfax, the face is described as “wrathful.” Local Orthodox clergy link the visitation to three tragedies: “the mine accident near Novokuznetsk, the air crash in Samara, and the fire in the house for the elderly in the village of Kamyshevskaya.”

I don’t know enough about Christianity and how it is practiced differently all over the world, but I’d bet that the folks whom take this visitation as a warning have very different views about their faith than the folks outside of Chicago flocking to this Jesus tree.

This story is short, sweet and, dare I say, typical, when it comes to such events. I guess the crucifixion form comes through better at night, thanks to the help of a streetlight.

Unlike Twinkies, these events can be found all over the world, saying plenty about what binds us all together, and also makes us all so very different.
Posted by Buzz at 9:04 PM 1 comment:

It's getting to the point that I don't even know where to begin with these posts. If you've been paying attention to Madonna of the Toast happenings, then you should know that tomorrow, Tuesday, March 20, I will be reading at KGB here in New York. The reading begins at 7:30. Next week, I'm off to Nashville to help celebrate Bongo Java's birthday on March 28. This is the cafe where the Nun Bun used to reside.

And speaking of the Nun Bun, here it is catching some rays with a Jesus impersonator! In the book, I examine the Nun Bun story, as it is one of the more compelling tales of religion and theft. No one has heard about the Nun Bun in a while, but a new ransom note, which was sent to Nashville's The Tennessean, shows that the Nun Bun, or at least the myth of the Nun Bun, is alive, well and ongoing. Seems like its captor is getting a bit cocky, or at least tanned.

When a cinnamon roll can garner such attention, be robbed and shuttled around the country, it makes you think, many, many thoughts. These events mean as much as they obscure, and I think that's the point, or at least why such stories get covered EVERYWHERE, even in hip places like Boing Boing.
Posted by Buzz at 3:55 PM No comments:

Squinting the Night Away

Saturday night, and I’m blogging. Back from unusually warm California, where both San Francisco and Los Angeles treated me well. The San Francisco Chronicle interviewed me, and plugged the party on the cover of its weekend guide!

It’s cold here at home, and, amazingly, I’m awake. With the exceptions of a 3-hour nap earlier today and a few nods chasing snow squalls from Ohio to New York, I’ve been up since 7:00 a.m. Pacific time, Friday, March 16; right now, night has just stepped into Sunday morning. Why was I in Ohio? Because Ohio is on the way home from Chicago, likewise for Indiana, Pennsylvania and Jersey.

Rather than spend three nights holed up in a hotel in a city where I know no one, I befriended two commendably adventurous spring break college students – one male, one female – and together, the three of us rented a car and drove all night. My eyes played plenty of tricks, what with the rooster tails of slush flayed across the windshield by big rigs, the precipitation and how the clouds and moon textured the land through which we pushed. I was looking for faces, wanted them to flicker through the barren trees: John Coltrane playing a soprano sax cut by oncoming headlights. No such luck. I wanted it too badly. I was looking for something because it was what I wanted to see. But it’s more about what happens when least we expect it, like when you all of the sudden drive 14 hours, talking with two complete strangers about Marshall McLuhan, Pink Floyd and why people from Hawaii love Spam. 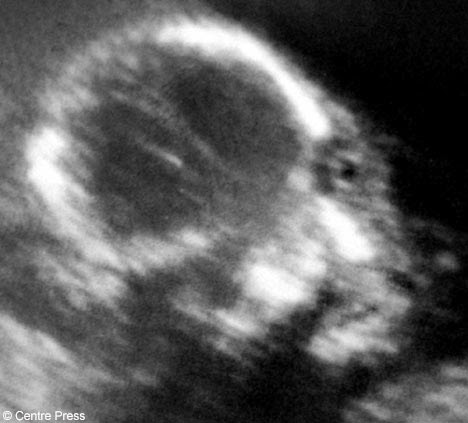 Recently, Amanda McLean, from Glasgow, Scotland, got this ultrasound of her child, also spotting the face of Jesus. Squint, or stay up for a couple of days, and you can see a wide-open left eye and a moustache tapering into a beard.

One of the over 80 million women worldwide living with endometriosis, McLean was told that she had less than a one-in-ten chance of giving birth to a healthy child. The doctors and parents had been treating the pregnancy with caution, until this particular ultrasound, after which the baby has been kicking away. For McLean, it is a total reassurance, found in a place where she wasn’t looking to find anything, except for the baby she was never supposed to have.
Posted by Buzz at 11:48 PM No comments:

It's been a mild winter here in New York, so the brazen cold gripping the region over the last couple of days has gotten me even more psyched for my week in California spreading the word about Madonna of the Toast.

On Saturday, March 10 at Hotel Utah in San Francisco, I'll be reading, along with some of my pals. Doors are at 8:00, readings begin at 9:00. Sliding scale admission, but $15 gets you a copy of the book. There will be music, too!

Then on Thursday, March 15 at The Venice Contemporary in Los Angeles, I'm reading with Mike the Poet and fellow MBP author Mark Ferem. The event is free, and so are select drinks from the bar! How can you go wrong?

And in the spirit of grand western landscapes, here is what one man claims is the Virgin Mary in basalt. The photograph comes from the Times-News, which reported the story of this sighting in Twin Falls, Idaho, by Shoshone Falls. It was reported just a few weeks ago, though it didn't get much traction in the media.

Naysayer or not, you can’t deny that the visual manifestations of recognizable faces carry with them great cultural import. Why else would the media never tire of such stories? Why would these stories be reported in such venues as the New York Times and Fortean Times? And why would two movies, one of them an indie the other borne out of Hollywood, devote great expenditures of time, labor and money to the topic? The answer is simple: one way or another, these events are emblematic of our contemporary cultural context. The fact that such stories get attention in all conceivable media outlets evidences this claim. Belief and its mysteries fascinate humans, whether that belief is rooted in religion or some secular or commercial –ism.

More than one person has told me that Madonna of the Toast would convert into a great documentary. I agree, but I’m waiting on someone to make me the offer I can’t refuse (though any and all offers will be entertained). In the meantime, there are two fictional flicks that examine what happens when the face of Jesus appears unexpectedly, on a screen door in one of the movies and on a tortilla in the other.

Screen Door Jesus tracks how a small town in Texas responds to a woman spotting Christ on her screen door. Of course, the image sparks all sorts of action related to issues of race and religion. I found out about this movie a few months ago as a result of blog research. It’s a few years old, screened at some festivals and is due out on DVD in the not too distant future.

Tortilla Heaven is based on the true story of a small New Mexico town where a tortilla gets cooked-up, charred with the likeness of Jesus. The website boasts the script as a “modern-day fable.” You can imagine the plot: person discovers face of Jesus, word of face spreads, people come, tortilla is exploited, person ultimately undergoes catharsis.

I haven’t seen either of these movies all the way through, so I’m in no position to write reviews. Regardless of creative or artistic merits, however, both of these films craft their commentary from these phenomena. I can appreciate that. These events matter, and not just to the people who discover them or congregate to take a gander at the latest iconic shape. As I’ve written before, these events generate action, on a grand scale, across a comprehensive demographic swath, because it all boils down to the human factor. We like to look at these objects, read about them, respond to them and interpret them.

Why? Because no amount of science, doctrine or theory can explain everything that happens in this world, though we can gauge the value of events by how people react and respond.
Posted by Buzz at 11:37 PM No comments: