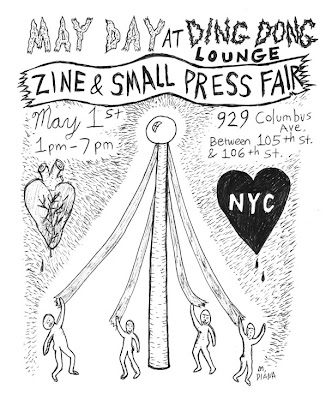 Greetings one and all. I've been busy with some non-Madonna of the Toast related projects of late. For the curious among you, here are some dates and links loosely related to said busyness:

This Saturday I'll be reading from I Like to Keep My Troubles On the Windy Side of Things as part of May Day at Ding Dong. I read around 2:30pm and I can say from experience that the Ding Dong Lounge is a fine venue for early afternoon drinking and literary revelry. There will be zines and indie presses a plenty - including the wonderful Fractious Press - plus some minstrels, including Ed Askew. 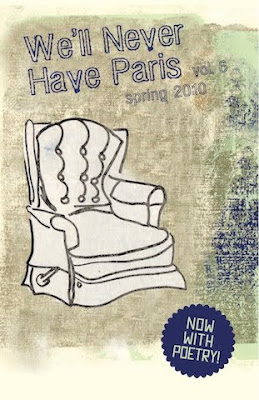 On May 12 I'll be on Washington Heights Free Radio, talking shop, reading various words and spinning some tunes. Why? Because I have a poem in the latest issue of We'll Never Have Paris.

For those of you who prefer reading over listening, you can check out an essay about "obsession" over at The Millions.

And for the hardcore readers amongst you that still like to hold paper in your hands as you read, the latest issue of Grafik includes my review of Cartographies of Time.
Posted by Buzz at 6:46 PM No comments:

Labels: Ding Dong Lounge, Ed Askew, Fractious Press, I Like To Keep My Troubles On The Windy Side Of Things, The Millions, Washington Heights Free Radio, We'll Never Have Paris

Last year on April 20, I posted a little tidbit about this strange Kit Kat Jesus, and asked, A brilliant Nestle publicity stunt or a divine snack? Turns out it was the former and now the truth is ricocheting around the interweb, thanks to a website and several Youtube clips like this one:

One of my favorite blog entries, he typed modestly, is Thoughts About News Covering the News of the News. We live in an infotainment culture and Madonna of the Toast stories thrive in such an atmosphere.

According to a comment at Digital Buzz Blog, the ad agency behind this viral marketing is UbachsWisbrun/JWT (will look into this). No matter if that’s true or not, the creators tapped a cranial fold with this concept. In four days this story found its way onto 140,000 websites (including this one), ranging from personal blogs to bona fide media outlets. Because of the candy’s catchy slogan everyone, myself included, riffed on “break me off a piece of that Kit Kat bar” – a no-brainer.

But you know what? The narrator of this case study video points out that everyone who posted and re-posted the story, everyone who read it and talked about it with others, we all became the advertising – ingenious and emblematic of our era to be sure. Because of technology's acceleration we have lost a sense of distance and separation and this funnels all of us into the same media environment and we become the media and the environment.

Marshall McLuhan was the first to say it, so I leave you with his words, from The Medium is the Massage:

Electric circuitry profoundly involves men with one another. Information pours upon us, instantaneously and continuously. As soon as the information is acquired, it is very rapidly replaced by still newer information. Our electrically-configured world has forced us to move from the habit of data classification to the mode of pattern recognition. We can no longer build serially, block-by-block, step-by-step, because instant communication insures that all factors of the environment and of experience coexist in a state of active interplay.

Thanks to Tom Hamling for sending me the video!
Posted by Buzz at 9:04 PM 2 comments: