The story of Dan and Sara Bell’s Cheesus has been making the media rounds of late. According to this CBS 11 report the Texas couple bought a bag of Cheetos and Sara got to eating them: "I was putting them in my hand and I had eaten most of the ones in my hand, and one was left lying there. And I said, 'Oh my gosh, look at this. It really looks like a person in a robe praying.'"

The Bells have joked about trying to sell their find on eBay, though for now it’s just being stored in a plastic box: “They say it is a reminder of their blessings from God; but primarily they think it's a funny Cheeto.”

The couple dubbed the 2-inch tall snack “Cheesus” but they should not be credited with coining the term. If you remember, back in March of 2008 the original Cheesus was made public – how quickly the media and its minions forget. The Week, a magazine that distills the most newsworthy stories of the previous week, really demonstrates the media’s lack of any memory. In the magazine’s gloss of this story, which I’m shocked they bothered to pick up, there is no mention of the original Cheesus. Furthermore, they cite an article from the Houston Chronicle written by a rabbi who wonders, “Why don’t Jews see things in our food?”

Obviously not enough people have read Madonna of the Toast or kept up with the blog. Who can forget the Star of David oatmeal?!?
Posted by Buzz at 10:42 AM No comments:

Iceman Did Not Keep His Cool

Remember back in 1997 when the Virgin Mary/Our Lady of Guadalupe was spotted on a tree in Salt Lake City? Neither do I. But news of Leslie Iceman’s attempt to burn down the tree offers us an excuse to stroll down memory lane. According to this ABC 4 story, Iceman, a homeless man, “used matches and cardboard to try and burn the platform that leads up to the spot where the image was.”

Apparently the Virgin’s form is no longer, thanks to a previous incident during which the “image was gouged out.” People still congregate at the tree, however, and the shrine remains. Facing charges of public intoxication and arson, there’s no speculation about why Iceman did what he did.

Above, the image as it once appeared and the image superimposed with an actual painting of Mary.

Here is a history of the tree written on the occasion of the visual manifestation’s tenth anniversary. The author, Richelle Hawks, was the evening manager of the New Age and paranormal section at a Salt Lake City Barnes & Noble back in 1997. One night a customer informed her that the form of Mary had appeared on this tree and after closing that night she and a friend went to check it out: “There was a ladder up against a tree as the woman described . . . The only light in this rundown, crack-house-infested neighborhood was a lone, flickering streetlamp. But, there did seem to be a darker, detailed oval figure in the smooth stump-which could pass even in the bad lighting for the traditional Virgin of Guadalupe. And it was wet – 'crying', as the woman described.”

Hawks relays the vague details of the initial discovery, credited to an anonymous city official “who was attending to or cutting the tree's broken limb, which had been damaged by lightning.” Of course, Salt Lake City’s Catholics are a minority, but an organized one that is predominately Latino and the shrine came to be. The piece goes on to draw parallel’s between these events and the story of Juan Diego and Our Lady of Guadalupe. A bit of a stretch, but Hawks also posits that the tree actually led to the neighborhood’s gentrification. 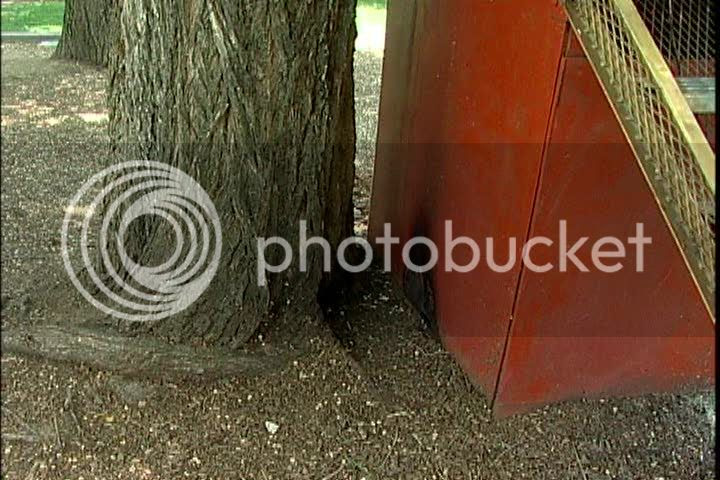 How long before someone comes along and sees Mary in the charred residual of Leslie Iceman’s failed effort?
Posted by Buzz at 5:17 PM 1 comment:

If you haven’t noticed, newspapers and magazines have been dropping like flies, leaving reporters and freelance writers with fewer and fewer outlets to hawk their written wares. Just ask Jonathan Tilove, a long-time Washington DC beat reporter who has been hustling between bureaus for the last several months. According to this email he sent to Poynter Online, it was all of his shuttling around the capital going from cubicle to cubicle that resulted in him discovering this likeness of the Virgin Mary. In his words: “On Monday evening, May 4, I went back to the Cox office to pack the rest of my boxes and clean out my cubicle. And there it was, on my desk, a coffee stain in the image of the Virgin Mary. I was a little surprised. Why me? I'm Jewish.”

Tilove answers his own question: religion aside, this guy has a lot of Mary in his life. He and his wife honeymooned in Fatima, Portugal, location of a very famous Mary visitation in 1917; Tilove also admits that he and his wife have lots of Mary art in their home.

Leave it to a hard-nosed journalist, however, to push speculation aside and stick with the facts:

Perhaps, most crucially, I provided the medium for the appearance of the coffee-stain Madonna by allowing the remains of a cup of coffee to slowly leak out of a paper cup and then only casually blotting up the spill with an old notebook. I am still not sure what it means, but I confess that amid all the layoffs and furloughs and forced relocations, seeing the image comforted me. As it has been written, "When I find myself in times of trouble, mother Mary comes to me ..."

The form actually looks more like a mushroom-capped fairy. But it's not about what I see.

The form really struck Maciel because just two days before seeing it her brother had died of a heart attack and this was her first day back at work: “I believe that for me it’s to give me the strength to continue on.”

While the visual manifestation of this iconic form is pretty standard by Madonna of the Toast standards, the story seems to be making the media rounds by virtue of the fact that the Las Palmas Swap Meet had brought some Lucha Libre wrestlers in from Mexico. The visit made by Renegado and Mr. Tempest to the newly erected shrine provided a unique photo-op. Said Mr. Tempest: “I follow Our Lady of Guadalupe . . . This is amazing. It’s a true miracle.”
Posted by Buzz at 10:56 AM 1 comment: