Will the Real Cheesus Step Forward?

From Missouri, the Show Me State: Kelly Ramey reached into a bag of Cheetos and felt something unusual. She pulled out this Cheeto (above), thought it looked like Christ on the Cross and she and her husband started calling it Cheesus. Now it's news. You can watch the CBS report:

For those of you keeping score, this is not the first Cheesus. I wrote about the first one here. This is what it looked like:

If I had to choose the real Cheesus, my decision would be an easy one.
Posted by Buzz at 4:38 PM 1 comment:

The image above is believed to be the Virgin Mary on the glass door of a home entertainment unit in Mangatarem, Pangasinan, Philippines, according to this ABS-CBN report. Yes, it’s been a globetrotting couple of posts lately. Better than its location, this image, along with a Jesus image on the opposite door of the same piece of furniture, has already been credited with curing a sore throat so severe that the afflicted woman in question had lost her ability to speak. While the family that owns the holy hutch has chosen to remain anonymous in the beady eyes of the media, neighbor Hilda Evangelista has praised the object’s healing wonders, crediting it for restoring her voice.

The article goes on to say that other neighbors have been showing up at the home to pray, but it doesn’t sound like the owners are so keen to have them around: “A member of the family noticed a ‘shadow-like’ image of a veiled woman while she was wiping the glass doors of their television rack. The family said they wiped the image over and over, but could not erase it.” Ha!

And, just to slake anyone’s concern that Americans have grown weary of such stories, here’s a Virgin Mary rust stain from a sink in Salinas, California, according to this KARE 11 report. Found by a plumber working on a drainage system as part of renovations for this soon-to-be restaurant, the owner thinks this sighting is fortuitous, so long as it is cleaned up before local health inspectors pay a visit.
Posted by Buzz at 4:06 PM 1 comment: 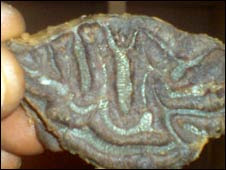 According to this BBC report, a diner in Birnin Kebbi, Nigeria, saw “the Arabic word for God and the name of the prophet Muhammad” in beef gristle that had been boiled and then fried. Since first being discovered last week, thousands of people have visited the eatery to take a look, and Muslim scholars that frequent the joint claim the incident as proof that Islam is the world’s one and only true religion.

A blogger over at Epicurious.com has compiled a list of such foodie visual manifestations, most of which I have covered in the book or on this here blog. Having looked at lots of foodstuffs emblazoned with religious and secular iconography – pancakes, oatmeal, tomatoes, carrots, pretzels, potato chips, chocolate, etc., etc. – I’ve wondered about the wasted food.

Judging by the image of this gristle, it seems best that no one ate this particular example. Of course, Nigeria is not America or France, or even South Africa for that matter. I like to eat, and have eaten in some pretty rustic places, like the slums of Nairobi and jungles of Malaysia, but I have never eaten a piece of meat, or gristle, that looks like this one.

Eating habits aside, a sighting like this really drives home the point how similar we humans really are, especially in our understanding of the world in the continuous, pixilated glare of images.
Posted by Buzz at 3:05 PM 1 comment: 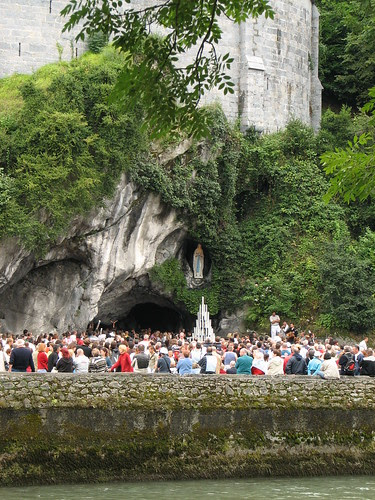 What’s that I smell? Is it Madonna of the Toast burning? I don’t know what it is exactly, but something is in the air. I’ve been noticing more and more media outlets devoting time to the ideas behind the stories I’ve been relaying to you for a while now. Scroll down and see the last two, or just chew on this one from the venerable Financial Times.

The story puts into perspective sightings of the Virgin Mary in Lourdes, France, back in 1858. Writer Matthew Engel uses that sighting and the hordes of visitors who have since made the pilgrimage to Lourdes (a city with more hotel rooms, according to the article, than any other French city aside from Paris) to examine the city’s immense popularity as a Christian tourist trap in light of Christianity’s decline in popularity. Now, while a ghostly sighting of a holy figure is slightly out of the Madonna of the Toast image on an object realm, the two are certainly related, like cousins.

Jesus or the Virgin Mary are seen and people flock. It is the aftermath of a vision, whether seen by only one person or hundreds that gawk at a rock or telephone pole, that is the story. Engel really makes a great point on why people do flock, even as Christianity looses much of its congregation because of controversy and generational shifts:

The faithful have become almost as marginalised as the sick. Yet here piety is not freakish or eccentric. . . . Here their faith can be reaffirmed, whether or not they feel cured, whether or not they feel the presence of the Mother of God. This is not a place of ageing priests and tiny congregations, not a place where Catholicism feels emaciated, apologetic or irrelevant. Here it is the Church Triumphant. As it once was right across Europe.

Engel is spot-on with this assessment. I have a tendency to frame these stories with media and technology, making the religious aspect of them secondary (though I think the media does very much secularize the stories, which is part of my interest). This article firmly roots these occurrences back in their source and for that it is well worth the read.
Posted by Buzz at 4:02 PM 1 comment:

An Expected Pattern on the Swirling Chaos

Surprise, surprise, another hard to see image of Jesus has shown up, this time on a wooden utility pole in Alice, Texas, according to this KRIS report. Steven Newlan first noticed the face as he pulled into his driveway. The report informs us that the “image is best viewed from the right side of the pole.” I’ve been swiveling my head around, but this one is really a stretch. Maybe it’s my monitor, as plenty of people have been showing up at the corner of 6th and Dickey to take a gander and add to the shrine of flowers and candles. Clearly, there are multiple people who have seen this image, accepting it at face value (zing!).

One of my Madonna of the Toast mantras is What do you see? My interest in these phenomena is their very existence and how these events often stir up all sorts of media and cultural attention. For me, that’s the story. I’ve never been particularly interested in dissecting people’s personal beliefs. But, lots of folks do, especially scientists who seem to take it as a personal affront when someone dismisses the notion of evolution.

Recently, I found one such example in this book review of Karl Giberson’s Saving Darwin: How to Be a Christian and Believe in Evolution. I haven’t read the book and I know nothing of this blog outside of this article, which caught my attention because it provides a riled up scientist’s take on religious pareidolia:

Where the pious see the Virgin Mary in a pita, we look and see cooked bread, random mottling, and a credulous brain that matches an irregular pattern to a familiar expectation. I think we have the more accurate and useful explanation; if the religious think they have a better explanation, then they're welcome to propose it and subject it to critical evaluation. If it's just nebulous, airy-fairy "you've got to believe" or "you've got to respect our faith" B.S., then they can go get in line with the dowsers and UFOlogists and Bigfoot fans.

I don't think Giberson sees universal spiritual truths in the Madonna-in-a-pita phenomenon (but maybe he does; I'll have to read his book to find out), but he does believe in something equivalent. He is not a literalist looking for a bearded man in the sky described in the bible, but instead has this vague metaphorical notion that if he melts down the bible in the philosophical flux of his personal beliefs, he'll be able to extract something ethereal and true from its words — a beautiful, loving, personal god who thinks he is really, really important and wants to give him eternal life in a paradise. That's his Madonna-in-a-pita, his credulous imposition of an expected pattern on the swirling chaos of generations of ravings and noise and poetry that is the Christian faith.

It is the very personal nature of these occurrences that appeals to me, but I found this passage to be a very concise gloss of why people do see these faces, no matter how hard it is to see them.
Posted by Buzz at 4:06 PM 1 comment:

More Than a Swirl

Salt Lake City’s Hatch Family Chocolates has a bucket of spumoni with a Jesus face staring up, daring to be scooped, according to this KUTV 2 report. Or is it Shakespeare, or one of the Beatles? Steve Hatch chalks the image up to coincidence, but concedes: “You can find inspiration in whatever you look at, I guess."

Such is the case with this image, provided by my cousin: 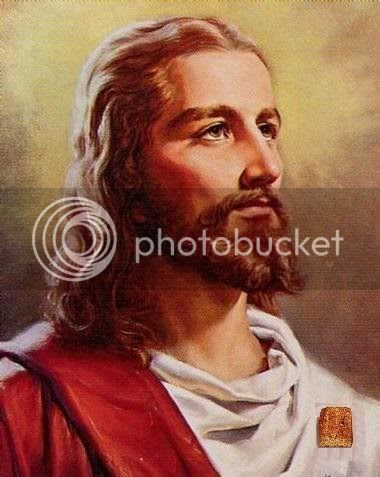 I'm Not the Only One Thinking About This Stuff

Straight out of Stockton, California: a Virgin of Guadalupe rock. Jamie Garcia had hit rock bottom (get it?), having lost his family because of his excessive drinking. While working construction, according to this CBS 13 report, Garcia found the rock pictured above and immediately felt that his life had changed. He quit his vices and grew closer with his wife and kids. Garcia believes the image to be that of the Virgin of Guadalupe with Juan Diego looking up at Her. Garcia goes on to say that he has been offered $80,000 for the rock, “but he refused, saying it’s priceless.” That’s something you say when you’re offered $100 for one of grandma’s old baubles, or you're mimicking one of those credit card commercials. If the story is true I guess credit (I'm on fire today with the wordplay, no?) has to be given to Garcia for not selling out.

If you’re a regular in these parts and have already read and re-read Madonna of the Toast you might be interested in this tongue-in-cheek perspective from the Contra Costa Times, which riffs on a Jesus ultrasound (different from the one I mentioned last post). Here’s an excerpt:

As I have two biological children, according to the last time I counted, I have some experience in trying to decipher ultrasound images. It's not easy. One minute you think you're looking at a little thumb, the next the doctor tells you that thumb is really a spleen. I once thought my daughter's ultrasound actually showed a squadron of Russian fighter planes attacking Dublin and tried to call the authorities. You just never know — it could happen.

Though seeing Jesus in there could be just as startling. I'm sure Mary and Joseph had the same reaction when they got their first three-dimensional ultrasound at Bethlehem Ultrasound and Donkey Feed.