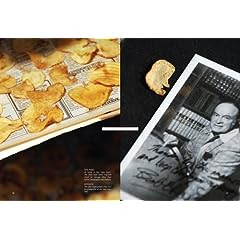 It won’t go down as one of television’s funniest moments like when Myrtle Young and her collection of pareidolia potato chips appeared on the Tonight Show with Johnny Carson (Letterman makes no secret of his idol worship for Carson as the master of television tomfoolery). But President Obama’s appearance last night on The Late Show certainly caught my attention for the heart-shaped potato tossed to Letterman by a woman in the audience. Do you think Obama heard about this potato rendition of him?

The video is below and if you want to read more about Myrtle Young check out Madonna of the Toast.

Did you know that Apia is the capital of Samoa? I didn’t, until an image of the Virgin Mary showed up there on the John Williams Building. According to these Samoa Live and News.com.au reports the image results from many years of dripping water and mold. But even with that explanation floating around as many as 500 people have gathered at one time to admire and discuss the form. And for good reason, Samoa just made a big change, a change so significant that the country prayed in unison to help the transition happen smoothly. In Samoa, they now drive on the left, like here in the United States.

Many interpret this visual manifestation as evidence that God has been looking down on the paradisal Pacific nation (though there has already been one report of a maimed pedestrian who forgot to look both ways when crossing the street). Others think the shape better resembles a bottle of Coke than the Virgin Mary.

Father Spartz Silva, Secretary of the Archbishop, had this to say: “It is creating curiosity, which is a good thing, it has triggered us to ask ourselves the basic question of who we are, and our purpose in life.”

I guess hosting a season of Survivor doesn’t count as “purpose.”
Posted by Buzz at 9:41 PM 2 comments:

NASA’s Mars Reconnaissance Orbiter snapped some photographs recently and, surprise surprise, some folks see a robed Jesus basking on the planet’s surface. This Telegraph UK report says it all: “If looked at from the right angle – and with disbelief suspended – this photo released by NASA can appear to show the face and robed body of Christ.” On display once again the human proclivity for seeing what we want to see where we want to see it.

I couldn’t help but think of this while reading news of the half-hearted hijacking attempt by Jose Marc Flores Pereira a k a Josmar Flores. About an hour after an Aeromexico flight departed from Cancun on its way to Mexico City, Flores got the attention of the crew when he threatened to blow up the plane, brandishing a fake bomb, according to this Bloomberg report (apparently passengers had no clue what was going on until the plane landed in Mexico City and was surrounded by emergency vehicles). His demands? A visit with Mexican president Felipe Calderon to discuss a pending earthquake.

Originally from Bolivia, Flores has lived in Mexico for 17 years, has spent time in jail, was a drug addict and is a born-again Christian. According to Public Safety Minister Garcia Luna, Flores also “is a reverend . . . He said it was a divine revelation that drove him to this action.” The revelation? The date – an inverted 666, the Mark of the Beast a la the Book of Revelation.

No two people see the world the same. Some look at images from space, from places where humans have never set foot, and impose human mythology in the name of meaning; others see a calendar, isolate a single day in a certain month in a single year and see divinity.

Sometimes, these Madonna of the Toast images really grab your attention because the resemblance to an iconic face is quite striking. Other times the images are mind boggling because they resemble nothing at all, no matter how much you squint. Such is the case with this Virgin Mary agate. According to this Northland’s News Center report, Jesse Bradshaw, a devoted agate hunter, found this beauty in Northern Minnesota, though months passed before he identified the holy form.

In Bradshaw’s words: "Right here you see a face and a shadow of her eye and a nose and a mouth and a hood around her head there. . . I was kinda having a struggle and I woke up one morning and she was sitting on top of my other agates and staring me right in the face and I knew right away what it represented and I got so emotional; I just wanted to cry right away."

I see something that looks more like an extoskeletal alien. But maybe that’s just me. Bradshaw, however, is convinced that his discovery has blessed him, filling him with positive energy. Offers to purchase the agate have been made but Bradshaw won’t have any of it: “[T]he feeling it's given me is just incredible.”

For those of you keeping score at home, this is the second divine agate of the year. The first one hailed from Montana and possessed, to these well-trained eyes, a better semblance of the Mary. But hey, who am I to chide one’s happiness?

In other news, Madonna of the Toast is now on Facebook! Want to be my friend?
Posted by Buzz at 11:27 AM 2 comments: