In honor of the Honest Abe Lincoln penny pose struck by this cloud over Grand Falls, New Brunswick, I’m going to tell you the truth. Keeping up with the visual manifestations of iconic figures and forms has not been a priority of late . . . okay, it hasn’t been a priority for a while. Tracking and considering these happenings is a full-time job. Such sightings never stop, and they never will. It’s a fundamental aspect of our existence. Uploaded to YouTube on August 1, I just watched the video, viewer number 2,553,733. “Holy frig,” exclaims the man filming the sky.

The big picture is something I’m still trying to bring into focus, but for all of the differences in the countless individual stories, there are incredible commonalities. The commonalities are telling, though I’m still trying to crack the code. Recently I saw No Direction Home, Martin Scorsese’s Bob Dylan documentary. Recollecting the angry audiences that booed him when he first went electric, Dylan said something like, “Whatever they were mad about had nothing to do with what they heard.” We all carry so much with us that a song, a certain noise, a shadow or a scar can flip all sorts of internal switches and that’s why life on this planet looks as it does.

I’m going to keep looking and kick around some of these ideas from different angles. Most of this will be done in private. Some of it, like this piece about writers not wanting to read, will be shared, at least once a month at Print magazine's Imprint. I’ll do my best to post updates here, though I anticipate they will remain infrequent. The choice bits that do pop up here will be of interest to me, though perhaps not to you. We’ll just have to see . . .
Posted by Buzz at 10:20 PM 1 comment: 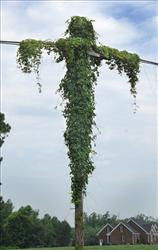 Thanks to the anonymous reader who left the tip about the kudzu Jesus in Kinston, North Carolina. We’re just shy of the two-year anniversary of this kudzu Jesus from Raleigh. It’s true, North Carolina has a lot of kudzu. This particular form has been spared a spray of pesticide.

How has the summer treated you so far? Unlike last year, I’m keeping close to New York. Haven’t had to use the air conditioner yet, though tonight is the first night where I seem to be breaking a sweat typing. Hmmm.

I’m reading next Monday in Washington Heights in support of the amazing Word Up Pop-Up Bookstore, run by friend Veronica Liu. The event is an official Meetup for legendary radio station WFMU (go here and scroll down to the February 26, 2007, episode of The Speakeasy with Dorian to hear me discuss Madonna of the Toast, should you dare, or care).

Also, my pal Christopher D Salyers is gearing up for a trip to Japan as part of his third and final installment of the Face Food books. Have you ever seen a Japanese bento box made to resemble a character? If you have, and you’re not Japanese, blame Christopher. A few years back he introduced charaben to Westerners and since then it has become quite the fad, both in terms of food and design. Since I know all of you have already spent your hard-earned money on my books, think about contributing to Christopher’s Kickstarter project, especially if you’ve ever wanted to see your face rendered in rice, seaweed and okra. 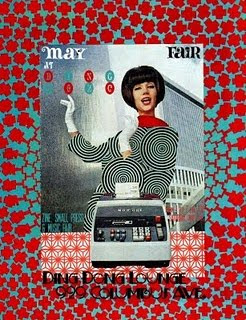 It’s May, and I’m reading twice this month.

Saturday the 7th in New York, the annual May Fair at the Ding Dong Lounge goes down. I think this will be my third time participating in this great afternoon of readings and indie presses. Veronica Liu of Fractious Press fame is one of the primary instigators and I am always happy to support her myriad projects. I’ve been working on a novel and am planning on brining something out of the woodshed.

On May 21, at Robin’s Bookstore in Philadelphia, I’ll be reading my contribution to The Forgotten Borough: Writers Come to Terms With Queens. I’ve read all over the country, but this will be my first time reading in my hometown, and hopefully not my last.

“Go through the lights, take the third reich”

I’ve been busy and Madonna of the Toast has not been a priority of late, but work and deadlines be damned in the name of some Hitler pareidolia! The internet has been aflutter with re-posts, re-Tweets and Facebook likes responding to Charli Dickenson’s Twitter pic of this home in Swansea, Wales. Stuck in traffic, she decided the slanted roofline bears an uncanny resemblance to Hitler. As we all know, all it takes is one random associative leap of faith, or fuhrer, and the whole world tunes in, especially when it comes to one of history’s greatest villains.

If the roof is the hairline, I guess the lintel is the mustache and the second floor windows the eyes. Hitler is deserving of many labels, but fat is not one of them, so I find the ground level windows to be distracting, as he never had jowls as far as I know. Admittedly, I am not a Hitler buff so maybe I’m wrong about this.

Poking around the various media outlets that have picked up this story, everyone seems to be taking it all in stride, with most reactions keeping it classy with clever wordplay and puns, like this WalesOnline report from which I borrowed the title of this post: “Various sites across the world are adding their own comments including one which offers these directions to the house: ‘Go through the lights, take the third reich and you’ll find it on your extreme right.’”

Of course, Hitler’s face is one of the most salient and disturbing icons of the twentieth century. A story like this reminds us of that, but plenty of ink has been dedicated to examining Hitler’s legacy, and all of that ink has resulted in a whole realm of publishing, filmmaking and art that makes money off of this image, such is the power of an icon.

My buddy Noma Bar has just created new covers for Picador editions of Don Delillo novels, including Running Dog. This is a riff on a previous illustration Bar did for an Esquire UK article about the demand for books about Hitler. 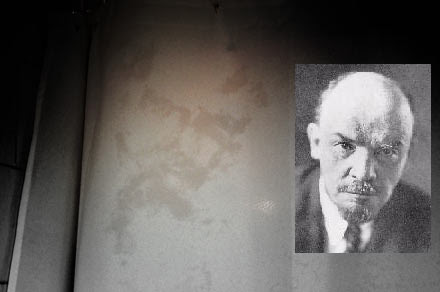 For all you diehard fans, you’ll remember that this is not the first instance of dictator pareidolia. Who can forget Lenin in the shower curtain?!?
Posted by Buzz at 2:54 PM 1 comment:

Banksy Didn't Win, Maybe I Will

For those of you who keep up with Hollywood's awards season you know that Banksy's documentary Exit Through the Gift Shop was nominated for an Oscar. It didn't win the Oscar, though it did win an Independent Spirit Award. The iconoclast street artist made a brilliant film that skewers the consumer culture that has made him a star. Because I've worked on numerous graffiti and street art books, I was lucky enough to attend an exclusive screening of the film. It floored me, and prompted me to write Chasing the Whale: Banksy, Obsession, and the Sea for The Millions.

Now I'm trying to drum up votes for the piece to make it to the next round of the 3 Quarks Daily Prize in Arts and Literature. Actual judges will decide the winners and award cash prizes, but for them to even consider this essay I need enough votes to get it in front of their eyes.

Here's the essay's opening to whet your appetite:

There is nothing positive about the dictionary definition of “obsession” – it haunts, is abnormal and persistent, like a bad rash. Tossing the word into a conversation typically indicates some form of criticism about a person and that person’s particular pursuit. Obsessions can lead to stalkers, delusion and great creations (the last two are not mutually exclusive); they can limit and restrict you to minutia or endow a unique vision that changes how you and others view the world at large. People indulge obsession in different ways – live it like a lifestyle or stir it into a creation like a minor but crucial recipe ingredient where it doesn’t overpower anything and complements everything. 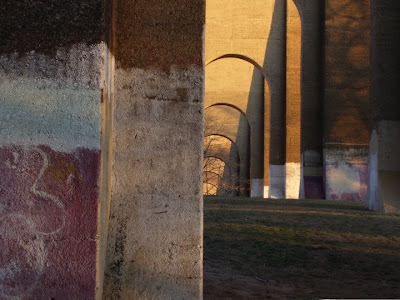 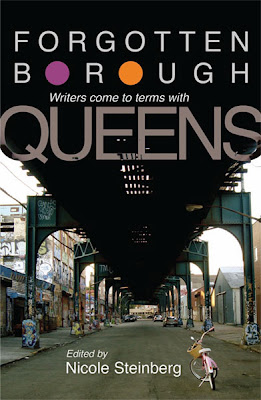 Kudos to Steinberg for putting this collection together and to SUNY for publishing it. Check out the book’s blog for more info.
Posted by Buzz at 10:00 PM No comments:

Hi friends and fans – 2010 is winding down and on both a personal and professional level it’s been a great year for me.

I’ve got a final 2010 reading coming up, Tuesday, December 14 at ACA Galleries, 529 West 20th St., 5th Floor, here in New York. I’m one of several readers representing Fractious Press, one of six presses being feted in the name of New York City Small Presses Night. Things get underway at 6pm, the readings will be brief and there will be wine and nibbles.

Though my short story collection, I Like to Keep My Troubles On the Windy Side of Things, has been out for a few months – old news in publishing terms – I’m happy to let some more folks know about it. In fact, I wrote a piece for The Millions (which was picked up by Andrew Sullivan at The Atlantic) that touches on the promotional aspect of publishing.

The book hasn’t received any big reviews or anything, but I guess people are discovering it here and there. Andria Alefhi included the book on this list of small press recommendations, which is great. I was actually a guest on Andria’s WHFR radio show, Zine Therapy.

So come on out on December 14 and help support renegade independent presses!

Labels: ACA Galleries, Fractious Press, I Like To Keep My Troubles On The Windy Side Of Things
Older Posts Home
Subscribe to: Posts (Atom)