The Man in the Ultrasound

In the sad but true category, Michael Jackson’s death resurrected his reputation. In the wake of the untimely and bizarre passing the world has forgotten about the questionable dalliances and eccentricities, remembering the hits and solidifying his legacy as one of the world’s all-time great entertainers. The release of This Is It, the albums and rumors insure that MJ’s image has been everywhere; the world has MJ on the mind.

Even Dawn Kelley and William Hickman, according to this Telegraph report: Kelley, pregnant with her seventh child, received an ultrasound from a particularly “powerful scanner . . . normally used to examine internal organs” and while looking at the images, the two saw Jackson’s face, as did their six children. The family aren’t mad-capped Jackson fans but they all see this image. Kelley knows her next child will be a girl, so no naming it Michael, but she says, “It is my seventh child, and they say seven is a mythical number.”

There is an aura of myth that surrounds Jackson, especially now so I’m sure this won’t be the last instance of MJ pareidolia. And for you regulars, you know it isn’t the first.
Posted by Buzz at 4:20 PM No comments:

Been There, Done That 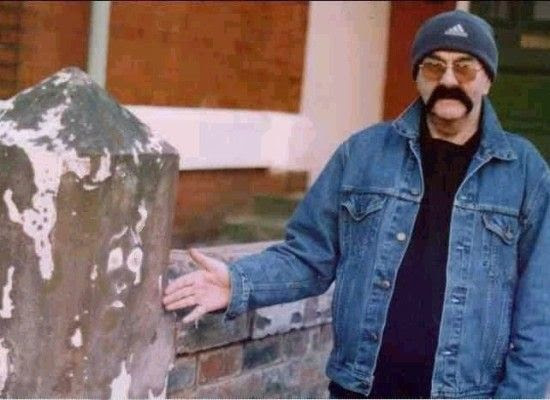 Being the first on the block has its perks, though most of them come along after the fact, once the rest of the world has caught up with you (or me). Now, I certainly cannot claim to be the the first one to take an interest in the unexpected visual manifestations of religious and secular icons, but I'm certainly the first one to write a book about the subject, and attach to these stories ideas ranging from Plato and Marshall McLuhan to changing the U.S. Constitution.

For you long-time readers, you'll of course remember how the New York Times ran an article right around when Madonna of the Toast was released. For a couple of days I received emails and phone calls asking, Why no mention of your book? Good question, especially since the Times claimed they could not contact Diana Duyser, someone I had been in regular contact with for the book.

Well, today, to just further prove that these sorts of stories remain culturally relevant, The Huffington Post has posted a slideshow of famous faces showing up in foodstuffs and foliage. Many of the examples appear in the book, and those that don't either surfaced after publication or could not be used for print (like the image above of Liverpudlian Keith Andrews and his John Lennon face); there are only a few I've never seen before. The images are fun to look at, but there's no real context for them and that's what I find so intriguing about this subject. Thing is, I think most people are more than happy to just gape and move on.

Maybe I'm just over thinking this stuff - is that so wrong?
Posted by Buzz at 9:58 AM No comments:

Buy That Man a Beer!

The photograph accompanies this Johnson City Press article makes me like Jim Stevens of Jonesborough, Tennessee. It makes me want to buy him a beer. There he is, looking at the window of his Isuzu and the image of Jesus rendered by morning dew with some regularity. He is casually nonplussed and probably ready to talk about something else. It is an admittedly recognizable face of Christ and it apparently keeps appearing most mornings. The window has even been rolled down (though Stevens isn’t going to wash it). But Stevens isn’t religious and it doesn’t seem like this will convert him: “[H]e believes strange things happen and that he has no explanation for the image on his truck’s window.”

These Madonna of the Toast tales usually grace the faithful, or those who’ve been looking for an excuse to roll holy. The image has definitely surprised Stevens but he isn’t trying to impose meaning or latch it to some aspect of his life, even with his “bum shoulder.” Stevens knows the image will stir up different emotions in different people and he’s happy to let everyone see whatever it is they want to see. Referring to employees at a market who went and took a gander at the truck when Stevens was shopping, he said, “There was no doubt when they came out they saw what they saw.”

Ain’t that the truth!
Posted by Buzz at 6:10 PM No comments:

Larry David has pissed some people off because of his namesake character’s latest awkward social fiasco on Curb Your Enthusiasm. Not familiar with the show? All you have to know is that episodes consist of David, co-creator of Seinfeld, muddling through an imbroglio that he has stirred up through some misunderstanding, and hilarity ensues.

In this case, David’s urine splatters approximations of tears onto a picture of Jesus. Others notice the droplets and think the image is weeping. The Week offers some different perspectives on the (non)controversy. As usual, the loudest and angriest pundits railing against David have neglected to really assess the facts, claiming David would never make fun of Jews or Muslims. Fact is, Curb Your Enthusiasm has always been equal opportunity when it comes to mocking organized religion. So, why all of the fuss?

The easy answer, unsurprisingly: the media. Once it, with its oh so many tentacles of dissemination, gets a hold on a story it doesn’t like to relent until all of the life has been squeezed out of the story. In the US, outlets like Fox News are prolific when it comes to this sort of inflation to the point of popping.

Sure, with the exception of bathrooms and choice plots of open ground, urine can be quite offensive should it land on you or your property. But David accidentally peeing on a towel that someone will inevitably dry their face with would not become international news. Yes, he’s having a laugh at the expense of religion. But on a Madonna of the Toast level the core criticism is of the human tendency to invest importance in the idea of a painting of Christ or Mary crying, or a Star of David bubbling up in oatmeal. Maybe it’s not even a criticism but more of a revealing of this tendency, and that’s what really rubbed people the wrong way.

No one wants to admit that they find meaning in a stain or wood grain but they are quick to congregate where Jesus has appeared in an oil stain or Mary in a panel of siding. Those inclined to act upon such visual manifestations don’t discern between the object and the image (and they sure don’t get into the semantics of worshipping, or belittling, an image of an image). David isn’t desecrating Jesus, but the way in which some people view not just Jesus but the whole of Christianity.

Of course, people who find the topic repulsive don’t have to watch the episode, the same as the people who ridicule the surprising appearance of an iconic form don’t have to pay it any attention. But in both cases, they(we) do, and that’s the point.
Posted by Buzz at 12:13 AM 3 comments: