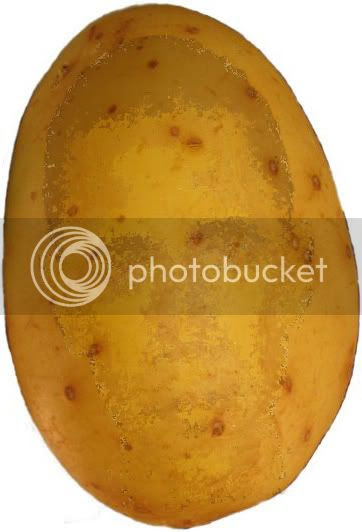 Update: Commenter Matthew Archbold has led me to the source of the Barack Obama potato: Creative Minority Report. This is from their mini-manifesto: “We intend to comment on Church related issues as it relates to its transformation, now begun, into a lean and mean evangelization machine.” The site’s motto is: “We Laugh Because We Believe.”

Archbold blogs for Creative Minority Report and it seems as if he is the person who posted, and presumably wrote, the story about this tater. According to the entry, 17-year-old Earl Jr. spotted a “dude” on the potato that his mother was about to eat. Earl Sr. asked if it was Jesus. Jr. said it was Obama. Now, Mom has dreams where Obama keeps repeating the word “change” but when she asks what it means, he just keeps saying the word. The little parody concludes: “None of the Dixons have voted in any of the past eight elections but promise that this time they'll vote for Obama. They're also considering selling the Potatobama on Ebay.”

This story reads like something out of The Onion, but it gels with Creative Minority Report’s self-proclaimed purpose: to comment about the Church’s “transformation.” The commodification of the divine and purportedly divine must be an aspect of that. This text is laced with all the frills of the stories I relay to you on this very blog: eBay, dreams, changed behavior. This family has never voted – no different from the many people who discover religious iconography but don’t attend church or pray. Even the critique of Senator Obama, suggesting that he does nothing but speak the word “change” over and over again. Are certain of the leaders of the Church only saying and not doing? Is this a result of the “lean and mean evangelization machine”?

I don’t know much about how this “transformation” is viewed by various people inside the Church and I know nothing about Church leadership, so maybe I am misinterpreting the Obama reference. But I give Creative Minority Report credit for getting me to think about it by using a face of a Presidential candidate on a potato.

Thanks for the lead, Matthew!
Posted by Buzz at 12:59 AM No comments:

Hail to the Potato

This was sent to me by Mark Batty, publisher of Madonna of the Toast. I've Googled around a bit and I can't source this image, so I don't know if someone is out there claiming to have yanked this potato out of the ground or if this is just some Photoshop fun. I imagine it's the latter. Nonetheless, it demonstrates the cultural reach of these visual manifestations. Senator Obama has certainly moved many Americans to think of him as a political second coming, which I assume the person who created this politico potato was alluding to. But maybe it is another mysterious visual manifestation of an icon . . .

No matter what your political beliefs, if you are a US citizen, make sure to register to vote so you can get out there and vote!
Posted by Buzz at 1:56 PM 1 comment:

This story is careening like the salted twists of a giant pretzel, like Johannes Kepler’s understanding of the universe. Earlier this week, Michael Fleming, of Eugene, Oregon, let a radio DJ post a 3-year-old pretzel found in a bag of Rold Gold on eBay, saying that he thought it resembled the Virgin Mary holding Baby Jesus. According to this article from The Oregonian, Fleming has this to say about his pretzel: “People seemed generally moved by these images . . . And they really seem to believe that the Virgin Mary is before them.” The pretzel got a big publicity boost from Tanner Hanney, host of KVAL radio’s “Donkey Show.” Hanney is eschewing the spiritual side of these phenomena: “We're kind of capitalizing on the stupidity of eBay and that people will buy anything.”

Calling eBay stupid seems stupid to me, but Hanney’s point about people’s willingness to buy pretty much anything is spot-on. The bidding on Fleming’s pretzel has reached $10,950. In terms of this story, however, the bigger point is people’s willingness to try selling pretty much anything on eBay, like this spate of Virgin Mary pretzels, all put on auction within the last couple of days.

The seller of this one makes no secret about needing some quick cash.

And then there’s this one (above), found four months ago, but just now offered up in light of all this hoopla.

And for good measure, especially if $1.75 is more in your price range.

This is not the first such pretzel auctioned on eBay. Back in 2005, the online casino Goldenpalace.com (the folks who bought Diana Duyser’s grilled cheese for $28,000) bought a Virgin Mary pretzel for $10,600 (below).

Some of these pretzels are being sold by people who claim that these shapes, by virtue of being noticed before they were chomped, are holy signs of a higher power. Others clearly went looking for some misshaped rolled dough and, voila! Either way, there are some interesting religious connections to pretzels. The origin of the pretzel is debated, but German bakery signage from the early 12th century is the earliest verifiable appearance of these tasty snacks. (As an aside, when I was in Frankfurt last October, I had an amazing ham and cheese sandwich, with great tangy mustard, on pretzel bread, something I had never had before. Loved it.)

One unsubstantiated reference credits an Italian monk who in 610 C.E. made pretzels to reward children for learning their prayers. The theory goes on to claim that the shape was intended to evoke the devotional pose of arms crossed against one’s chest.

There is also a connection between pretzels and Lent in that the snacks were eaten to make up for abstaining from other foods. In his book Astronomia nova, published in 1609, Johannes Kepler, assuming Earth as the center of the universe, equated the movement of orbiting planets “with the appearance of Lenten bread.” That’s a pretzel to you and me.

We’ll see how many of these pretzels sell, and for how much. Does anyone else think that these Virgin Mary pretzels look like something Pablo Picasso might have done had he been a baker? Makes me thirsty for a beer!
Posted by Buzz at 1:39 PM 1 comment:

Furniture maker Craig O’Connor, from Bensalem, Pennsylvania, spotted what he views as a Jesus-shaped discoloring after procuring this slab of New Jersey pine tree from his buddy’s yard. According to this CBS 3 report, some are calling it the “divine pine.” O’Connor, a Catholic, had no doubt about the shape: “When I seen it, I was just in awe, I think it's Jesus, Jesus' head … it looks like he is ascending into heaven.”

Philadelphia Weekly blogger Daniel McQuade thought the image resembled “a ghoul, a character in a Tim Burton animated film and, most definitely, that one prisoner at Abu Ghraib.” McQuade’s comparison is meant to be ironic, but it drives home how deeply embedded (another Iraq-war cultural artifact) images can become, where a shape harkens to a religious prophet or a symbol for torture. While Biblical iconography has been with us much longer than the imagery and lexicon of the current war in Iraq, both have infiltrated our minds, making them recognizable, no matter how we feel about either.

In O’Connor’s case, he seems to feel pretty good about wanting to make a buck off his discovery. Apparently, the wood was placed on eBay for a moment and got a quick $500 bid, prompting O’Connor to shut down the auction, eager with hopes of being able to raise awareness about his stump, resulting in a sale of at least $100,000. You guessed it, O’Connor’s pricing is based on the fact that Diana Duyser’s Virgin Mary grilled cheese sold for $28,000 on eBay, as documented in Madonna of the Toast.

Maybe O’Connor should stick to his day job and make a table out of the wood . . .
Posted by Buzz at 11:12 AM No comments:

As you can imagine, people like to share their own stories and experiences of pareidolia, emailing me a “Did you read about this one?” message and a link. I figured that since it’s Friday, and because many people like to have a bit of fun on Fridays, I’d share this visual treat with you. Thanks, Ximena!

Follow the directions and see what happens.(Sorry that a bit of the text is lost; I didn't want to shrink the image too much and make it hard to read.) Leave a comment and tell me what you see . . . 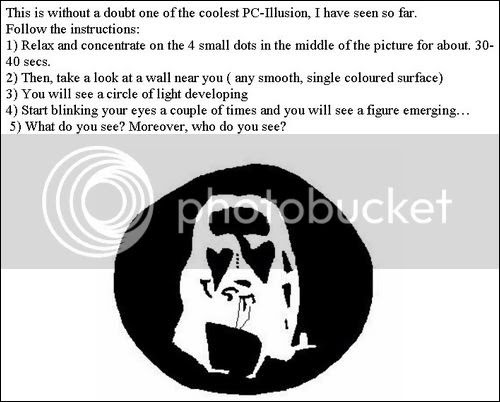 Since I’m keeping it light today, I also offer you this funny story about Ron Paul tortillas in the American Southwest, from TheSpoof.com, which claims that these visual manifestations are “now the most popular throughout the Southwest, even surpassing that of the Virgin Mary.” Unfortunately, they didn’t spoof an image of said tortillas, but the story is worth a read, especially since the US Presidential Election is lathering some voters up into states akin to proselytizing fervor.

Have a good weekend!
Posted by Buzz at 10:36 AM No comments:

Henry Poole is Here, and So is Hollywood

Back on January 23, I had a meeting with photographer Martha Cooper. While it was the first time I had met her, we had been emailing a bit and she knew about Madonna of the Toast. First thing she does when we meet is hand me that day’s New York Times Arts section, pointing me to the front-page article about the Sundance Film Festival. She told me that one of the mentioned movies involves a question of faith, instigated by the appearance of what may or may not be Jesus on a stucco wall. I thanked her and shuffled the paper into a pile of other papers, having read and written about films that dwell on these visual manifestations.

The other day I finally gave the article a look, and I have since learned more about Henry Poole is Here. Yes, the title has pulled me in, since it is not everyday that I share my surname with a fictional character, played by Luke Wilson no less. Even better, however, is that newbie distributor Overture Films picked up the flick for $3.5 million! This seems to drive home the fact that these stories have truly become part of our cultural fabric. I’ve been advocating that idea for the past year, with evidence the runs the cultural gamut, from eBay to Johnny Carson, and from The Simpsons to the US Constitution. Now, no one has paid me millions of dollars yet: indie book publishing and indie filmmaking are two different realms from what I can tell. But Sundance is famous as a clearinghouse for Hollywood to convert independent films to blockbusters, so I take this as a sign of things to come.

You can watch this video to find out more about the plot, though it sounds like much of what I write here. Henry Poole is terminally ill and hopes to spend his final days as a recluse, until his neighbor discovers what some see as the face of Jesus, which of course changes Poole’s outlook on life. Also interesting is that this movie also stars George Lopez, who was also in the less hyped Tortilla Heaven.

It seems like this movie will indeed be in theaters near you, but in the meantime, wouldn’t you rather read the book?
Posted by Buzz at 5:20 PM 2 comments: