To western Ukraine we go, to “a metallically reinforced factory wall at the Velyky Berezny township” to be exact. The wall belongs to a lumber factory, according to this Russia Today report, and it features an image of Jesus, prompting locals to pay their respects. Though, the police have also been paying close attention to the wall because “debates on the divinity of the image are often and heated, and in the multi-ethnic region – apart from Ukrainians the township is also inhabited by Rusyns, Hungarians and Slovaks – tensions may easily flare.”

It doesn’t really sound like Texas, California or Florida, does it? But fear not, technology makes the foreign familiar for all of us anymore, and this area of the Ukraine, for all of its ethnic conflicts, is no different. According to the article, many of the onlookers capture the image using, you guessed it, their mobile phones.

We all speak different languages, adhere to myriad traditions and beliefs, but in this day and age we all, no matter where in the world we reside, are accustomed to, dare I say rely on, the ability to memorialize a moment and then disseminate it using phones and other such hand-held gadgetry. I’m not complaining, too much, since my phone doesn’t have a camera. Plus, these phones definitely provide lots of Madonna of the Toast fodder. But isn’t is amazing just how these technologies level barriers of space and time, accelerating the power of the image?
Posted by Buzz at 10:59 AM 1 comment:

It Came From Above, Part II

Animal defecation and the Virgin Mary in the same sentence? Blasphemy you say? Well, according to this KWTX report, the Pachuca family of Bryan, Texas, calls it a blessing, and “more than a coincidence.”

Cristal Pachuca says the old truck doesn’t get much use, “but last weekend her husband decided to take it out of their garage and wash it . . . A few moments later the image appeared.”

While the Pachucas don’t use the word “miracle” to describe this bird bowel movement, the gawkers don’t hesitate: “Onlookers say the image is a miracle because the distinct colors and outline of the image on the truck match the image of Virgin Guadalupe.”

I guess an ornithologist familiar with the local flora, fauna, earthworms and such would be able to explain the coloration, but until I find a resident bird expert we’ll defer to the locals.

Of course, Texans know a thing or two about sacred fecal forms. Who remembers this post from May 2007 about a bird poop Jesus? How can you really forget such a thing? 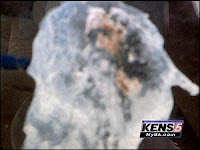 And since we’re strolling down memory lane, don’t forget about the book. Maybe if you leave it out on your windowsill it will collect its very own divine doo-doo . . .
Posted by Buzz at 3:38 PM No comments:

Another Tree, Another Country

This Virgin Mary tree stump marks Madonna of the Toast’s first trip to Ireland! According to this RTE report, workers chopping down trees at the Holy Mary Parish Church in Rathkeale, County Limerick, saw Mary in this cross section of one of the trees.

Upon being made public, nightly vigils have attracted hundreds of visitors and apparently thousands of people have signed a petition “to keep the stump in the grounds permanently.”

The church is not so cheery about the discovery. Father Willie Russell, a local priest, said, “It’s only a tree”; Father Paul Finnerty said, “While we do not wish in any way to detract from devotion to Our Lady, we would also wish to avoid anything which might lead to superstition.”

Probably not the best word choice on the part of Father Finnerty, what with Christianity being built around rites and rituals followed on blind faith.
Posted by Buzz at 3:17 PM No comments: 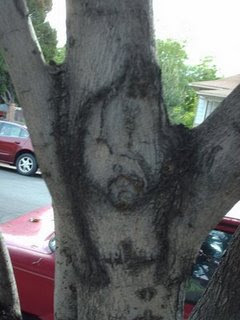 The ultimate long summer weekend looms so why do my own research when I can rely on a reader of this here blog? I was made aware of this Jesus tree by Helot over at Maniac Annex. Dubbed as “Jesus in the Maple Tree” the facial form, as pointed out on the blog, does bear an eerie resemblance to South Park’s version of Jesus.

Thanks for the lead Helot!

If any other readers have their own personal pareidolia feel free to share in the comments.

Keep any eye out for iconic forms in your fireworks . . .
Posted by Buzz at 3:22 PM No comments: