Hard to believe Thanksgiving has come and gone. Mine was good but rushed. I had to travel to London last weekend for book biz, but even when I don’t blog for a few days, these events don’t stop . . .

After attending her mother’s funeral, Shunattee Lewis flew back to her home in Sacramento, California, on Thanksgiving, according to this News 10 report. That night, still reeling from her mother’s loss to bone cancer, Lewis, for no particular reason, pulled a muffin pan out from a kitchen drawer. Having sat unused for years, the pattern in the pan “could have been rust, it could have been dried food, but whatever it is, Lewis and her family say the apparition resembles a matronly woman wearing a shroud.”

Seems hard to believe that the substance that created this image remains unidentifiable, but no matter what it is, Lewis believes it is a miracle, one linked directly to her mother’s death. Lewis’s husband first thought that it looked more like the Mona Lisa, which I can see, especially the high forehead. Their 8-year-old son had this to say: “It looks like she has a happy face and then don’t that look like a baby.”

No matter what you see, Lewis is convinced of the miracle because she is a believer. In fact, she believes in the form’s power so much that she has invited anyone interested in seeing the pan to come over to her home to take a look and share in its glory. Should you be in the Sacramento area, follow the link to the News 10 story and you’ll find a phone number.
Posted by Buzz at 9:35 AM No comments:

For After the Food

The Holidaze hovers. Friday, Black Friday as they call it here in the US, serves as a consumer ritual replete with massive sales, hordes of bargain shoppers and excessive media coverage of those who shop until they drop. What better way to mark the occasion than with a quick look at what eBay has to offer to those looking to stay home but still get some shopping done? Best thing about this stuff is that you won’t find these items in any of the chain stores near you.

This 18-inch oak log was split and revealed, to the hatchet man, “The distinct image of the Blessed Mother with the Baby Jesus on her rght shoulder as she looks down at Him.” Spelling and grammatical consistency aside, the seller is forthright about the reason for the high starting price of $5,000: “[T]his will alleviate some of my debt load which will in turn answer my prayers.” I can certainly appreciate that.

And then there is this tongue-in-cheek Jesus banana, or is it Ron Jeremy? Insert lewd joke here.

And I guess if you are shopping online, Madonna of the Toast can be your one-stop shop for all matter of iconography.

Gobble, gobble everyone!
Posted by Buzz at 2:52 PM No comments:

Just before Marilyn Smith was about to sprinkle chocolate chips on top of this pancake, she noticed “a faint image resembling Jesus and Mary.” According to this WPBF News 25 report, Smith was a bit skeptical about the image: “I saw what looked like, possibly, what people may imagine Jesus would look like, or Moses.” Dana Okane, Smith’s daughter, however, had no doubt, as she recognized the shapes immediately because she is a self-proclaimed spiritual person. When asked what it signifies, Okane said, “I think the message is extremely clear that the world bad better clean up its act.” So sure was Okane of this breakfast’s holiness, she decided to sell the pancake on eBay, starting the bidding at $35. Guess what – it sold, for $338.

What strikes me most about this little story is how matters of faith and belief are so individualized that a mother and daughter can hold two very different views about a discolored pancake. Okane read it as a message from God, and doubtless the sale bolstered her opinion. Smith on the other hand seemed to have a more “glass half empty” attitude about the object and what it may or may not mean to others: “Do I think that any nut will come along and pay a fortune for it like they did with the cheesecake or cheese sandwich? No, I hope not, because it really will eventually get really smelly and deteriorate.”

No word as of yet about the “nut” that shelled out the $338, or if the pancake has begun to rot. The folks with the Pope John Paul II pancake, from Madonna of the Toast, preserved theirs in the freezer. Diana Duyser’s grilled cheese sandwich has kept for over a decade with nothing more than some cotton swabbing to hold it in place. As they say, only time will tell.

I wonder if Okane is going to share any of the money with her mom. Seems like it would be the Christian thing to do. Either way, in Smith’s words, the two have a new exclamation to kick around: “We used to say, ‘Holy Cow,’ like everybody else, and after this happened, our new expression is, ‘Holy pancake!’”
Posted by Buzz at 3:27 PM No comments:

From the News to NASA, These Stories Can Cover Some Ground

As I mentioned in my last post, what continues to fascinate me about many of these visual manifestations and the stories borne out of the objects is how they resonate and extend through the news and culture at large. Take this charred California sycamore tree for example. For about two years, the faithful and curious alike have stopped to pay homage to what locals call “The Mary Tree.” According to this Daily News Los Angeles report, however, interest in the tree has grown lately because it survived the Buckweed fire, one of several large forest fires that razed portions of Southern California a few weeks ago. The Buckweed fire has been in the news quite a bit because it burned over 38,000 acres, forced the evacuation of 15,000 people and destroyed 21 homes; it is also the fire that a 10-year-old boy has admitted starting accidentally. Prosecutors and various state officials are mulling over whether or not to file criminal charges against the child, who by all accounts is a nice kid who made a BIG mistake, though his confession apparently makes it clear that arson was not on his agenda.

And from smoking swaths of such destruction, large enough to be seen from NASA satellites, emerges this singed shell of a tree on the side of the Sierra Highway in Agua Dulce. A pen dangles from a ribbon tied to the tree that people use to leave their prayers and wishes. Among the expected notes about health, healing, love and life, one can also find pleas for help with immigration issues. Talk about a topic right out of the national headlines!

So, in one blog post we have evoked iconography, ecology, immigration, belief and NASA -- and that's what Madonna of the Toast is all about!
Posted by Buzz at 1:34 PM No comments: 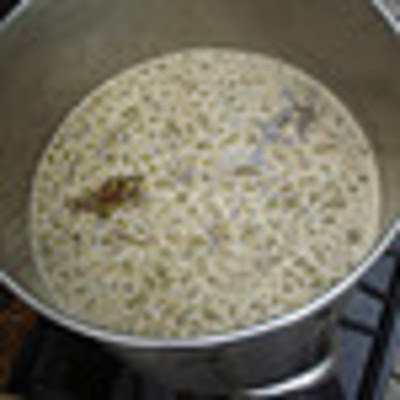 Hyperbole: a writer’s greatest tool. This is wort (the stage of brewing beer that creates flavor) simmering away, just out of a pumpkin. And yes, Neal Pollack wrote this post on Epicurious.com claiming, “if you stare long enough into the pot, you'll see the Virgin Mary.” So, Pollack didn’t actually see Mary in the pumpkin, he wasn’t even the one making the beer. And, being the caustic wordsmith that he is, the reference is, presumably, made firmly with tongue in cheek (though there is a hint of a veil in the upper right-hand portion of the pot).

Thanks to the wonders of Google News, however, I read this acerbic aside and couldn’t help but throw it up here, because like so many of these stories, it relays the extent to which these happenings have permeated culture. From brewing beer to reality television to Constitutional law (as posited in Madonna of the Toast) the human tendency to recognize iconic forms serves as a wonderful point of entry into the human condition: humorous, somber, absurd, and all of it important.

Virgin Mary or not, I bet that’s some great beer.
Posted by Buzz at 5:11 PM No comments:

Nancy Kelly McCabe of Wellington, Florida, has had a tough run of it, according to this Palm Beach Post report. In late August, she went to the beach at sunrise: “Until that day, the universe seemed to have a grudge against the 51-year-old: she's agoraphobic, and her mind is bipolar; she was on the verge of divorce and taking too many prescription pills to function with ease. The law firm she worked at had fired her.”

On the beach, however, McCabe found a seashell that while holding it up against the new morning light looked like the “Virgin Mary in her robes, head tilted and hands in prayer.” This sighting alone didn’t change McCabe’s outlook on life, as the following week she was evicted, her only option that of residing in the cabana behind her estranged husband’s house.

There’s a great line from the song “Born Under a Bad Sign” written by Booker T Jones and William Bell for Albert King's first album of the same name: “If it wasn’t for bad luck, I wouldn’t have no luck at all.” This sentiment seems to be at the heart of this story, as a spate of bad luck resulted in a run of good luck, and a happier life for McCabe. Her and her husband reconciled and she found a holistic healer that was able to wean her off some of her pharmaceutical regiment, which improved how she felt physically and how she slept.

McCabe admits that she was depressed and looking for a sign; she also new about her fellow Floridians that had found recognizable religious icons in unexpected places, and she admits that she was skeptical about seeing Mary in this shell. But, in the final analysis, McCabe’s life has taken a turn for the better. In her words: "Be it the placebo effect, I don't know . . . It worked."

Who knows if anyone else in the world would have picked up that very shell and seen the Virgin Mary? Chances are slim; I would have walked down to the water and seen how many times I could get it to skip. Again, and as I posit in Madonna of the Toast, it comes down to what each and every one of us sees. Rarely will our vision be the same, though it is all valid, and that’s what makes it interesting.
Posted by Buzz at 1:43 PM 1 comment: